These are from the China Glaze Fall 2011 collection, Metro. I suppose this collection is meant to be gritty? edgy? on trend? something like that. It offers a fairly wide range of colors. I'm trying to break away from my pink-red-purple-gold-teal rut and considered getting Westside Warrior, one of the newly popular puke greens (some people call this "olive"), and Trendsetter, which is sort of mustard (see Scrangie's lovely post here) but played it safe for this round.

I ordered these from Trans Design because a) the people who work at the Sally's Beauty Supply by my house are scary, and b) my Ulta gets its stock about eight months late. Also, Trans Design sells China Glaze for $2.99, and Sally's is $5.99 with the card if they aren't having a sale. So it tends to be cheaper even factoring in shipping. I visited a Sally's far away from my house today and viewed the puke green and the mustard in person. Trendsetter would look like my cat threw up on my hand, but I kind of did want Westside Warrior. I need to live more vivaciously. 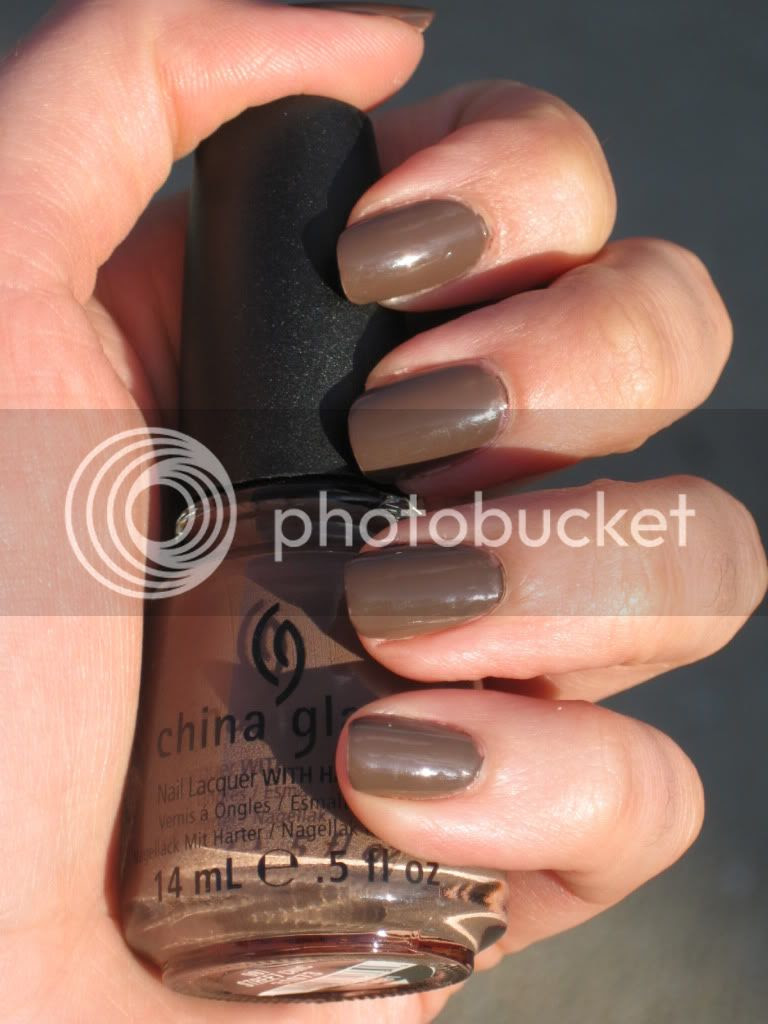 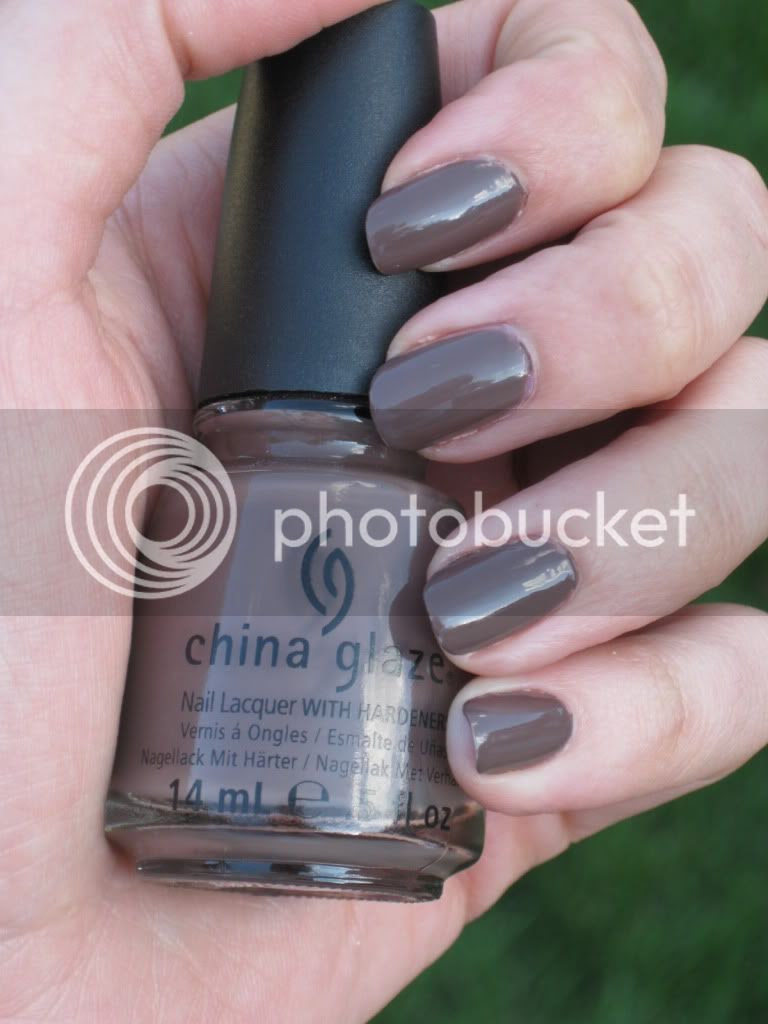 This is a perfect dupe for Essie's Hot Coco. I wore the two alternating every other finger to work one day, and no one could tell. It's a deep taupe creme with a hint of purple; I think it dries a little darker than it looks in the bottle. Essie's formula is a smidge more runny than China Glaze, if it makes any difference to you. 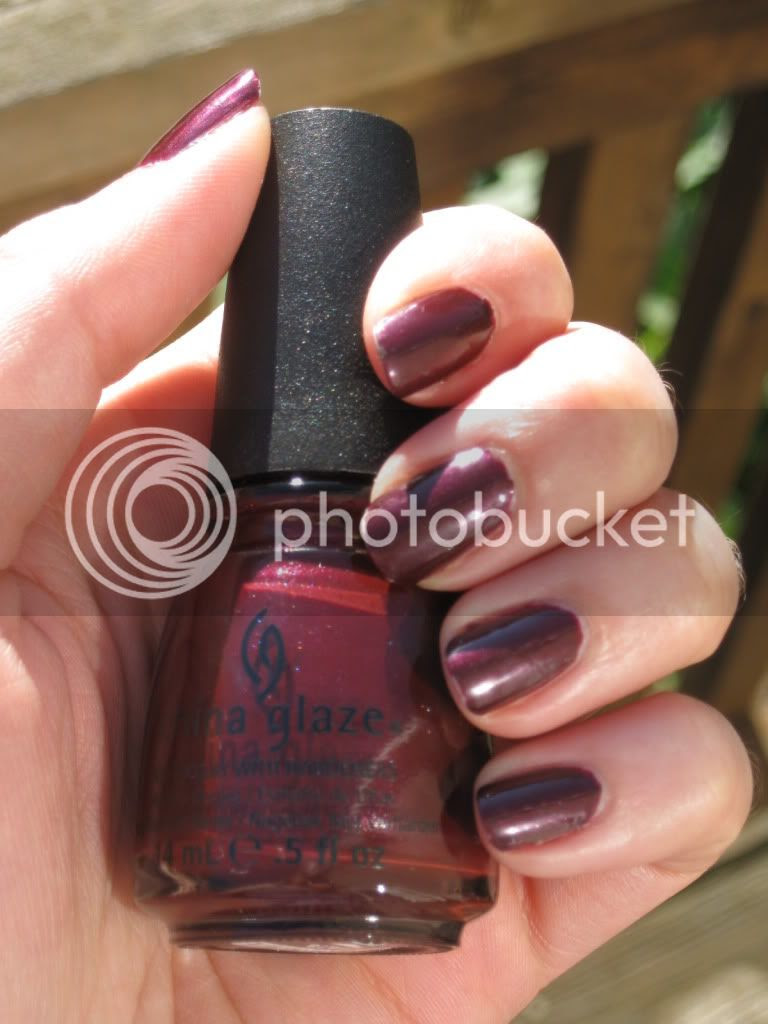 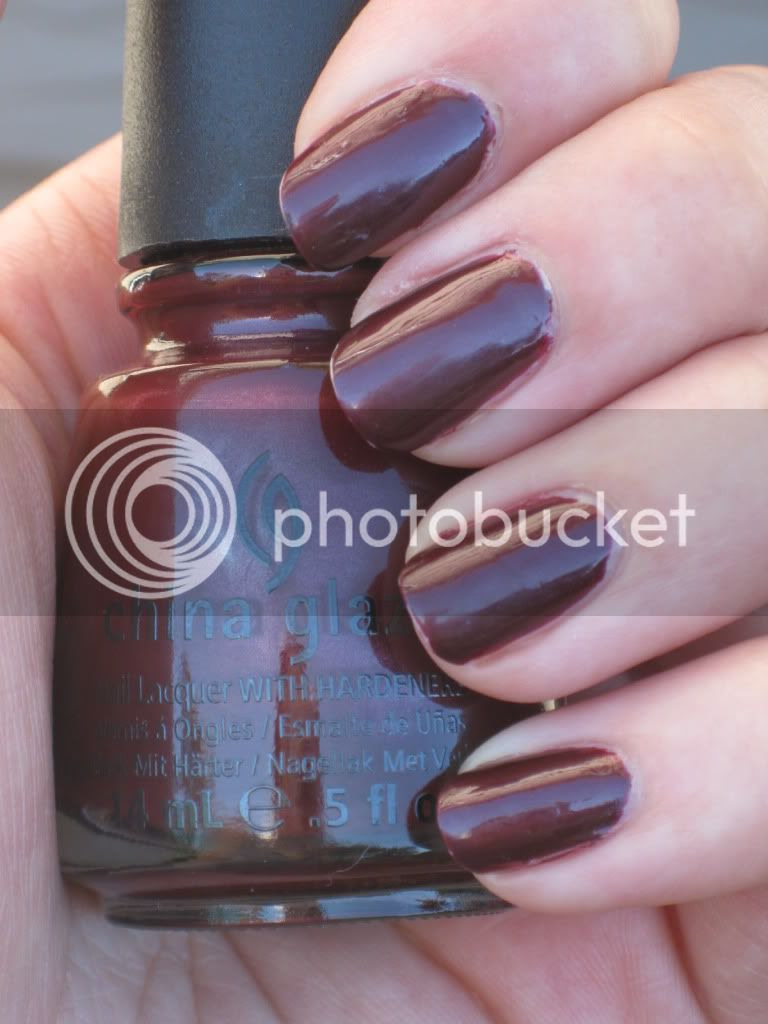 This is a nice burgundy creme. There are probably 347 dupes out there for this one too, but I don't own any personally. Like I said. It's nice.

I suffered a hideous break tonight, no doubt karmic punishment for admiring my glittery nails so under a direct light on Friday, and have whacked them all down to match in keeping with personal policy. In addition, all the pictures I took this week SUCKED, in large part due to vile weather conditions. So you will have to content yourselves with a picture of these lovely Halloween glitter polishes I picked up at Hy-Vee for < $2 apiece. 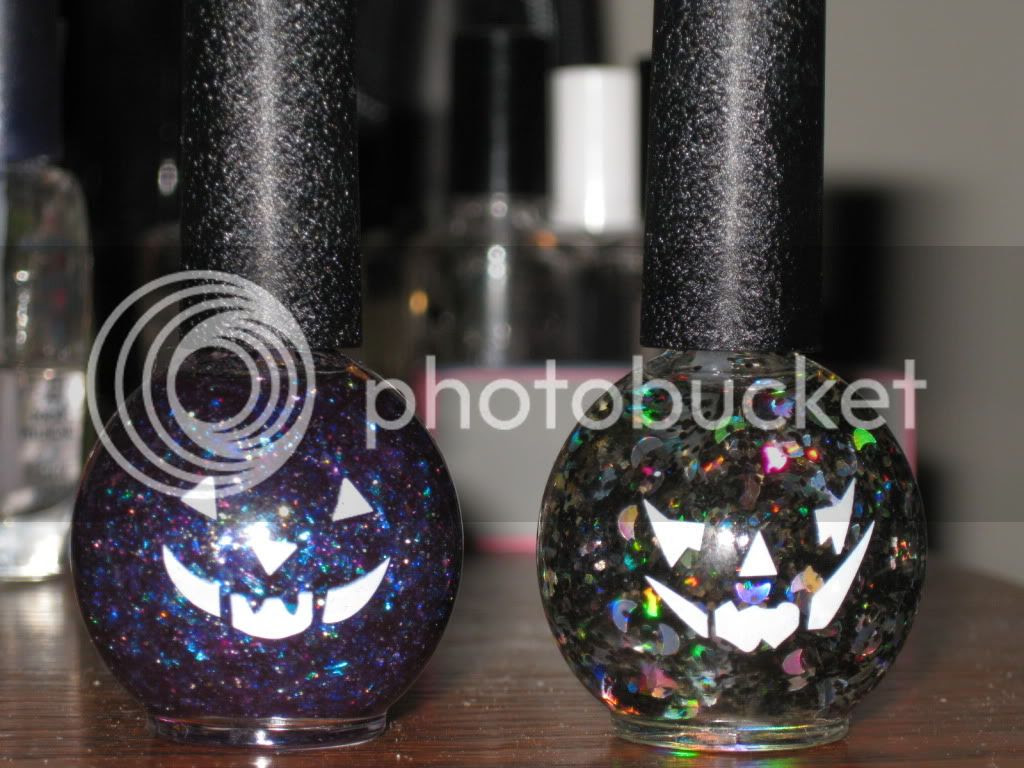 Their names are CHUNKY NAIL and PUMPKIN NAIL ENAMEL (or EUSTACE and TIMOTHY as I prefer to call them), and they reek of formaldehyde death. I put the purple one over what was on my toes, and it appears that this may build up to be wearable alone. Time will tell.

COMING UP NEXT WEEK: selections from the China Glaze fall 2011 collection, Metro. Displayed for you with love on my tiny, tiny stubs. Sigh.
Posted by Starfighter Tigerlily at 8:49 PM No comments:

I love Butter London. I love the little squared bottles and the logo with Queen Raven. I love the stupid fake British accent they affect. BABY I'M READY TO GO (on the rooftop shouting out) 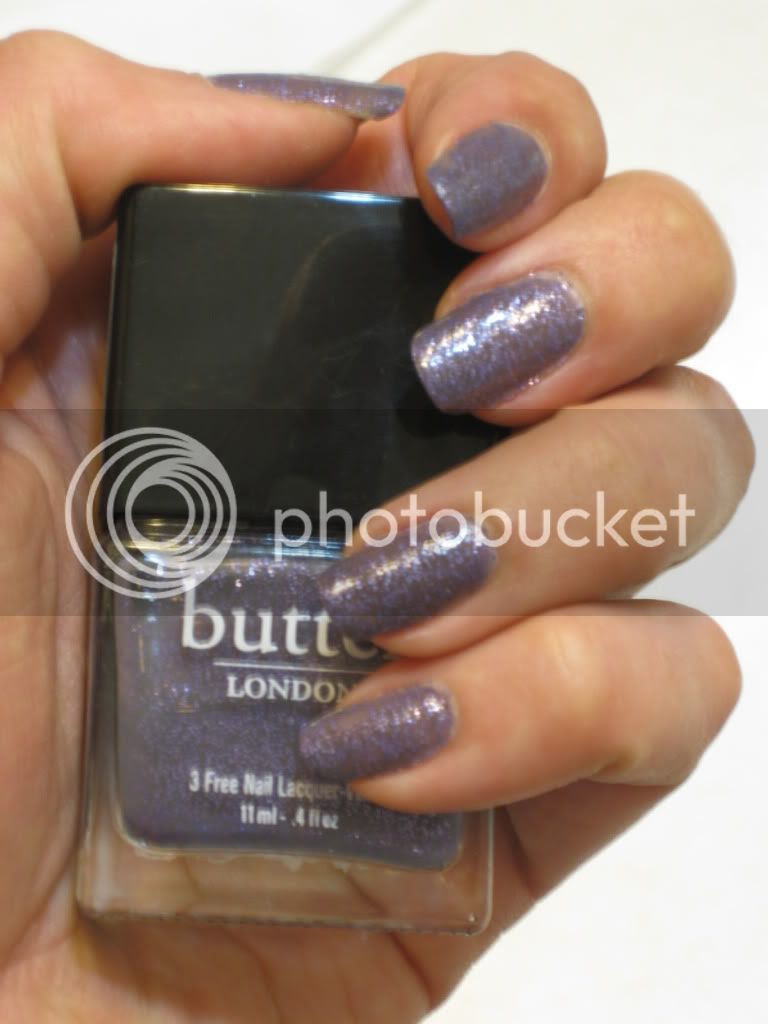 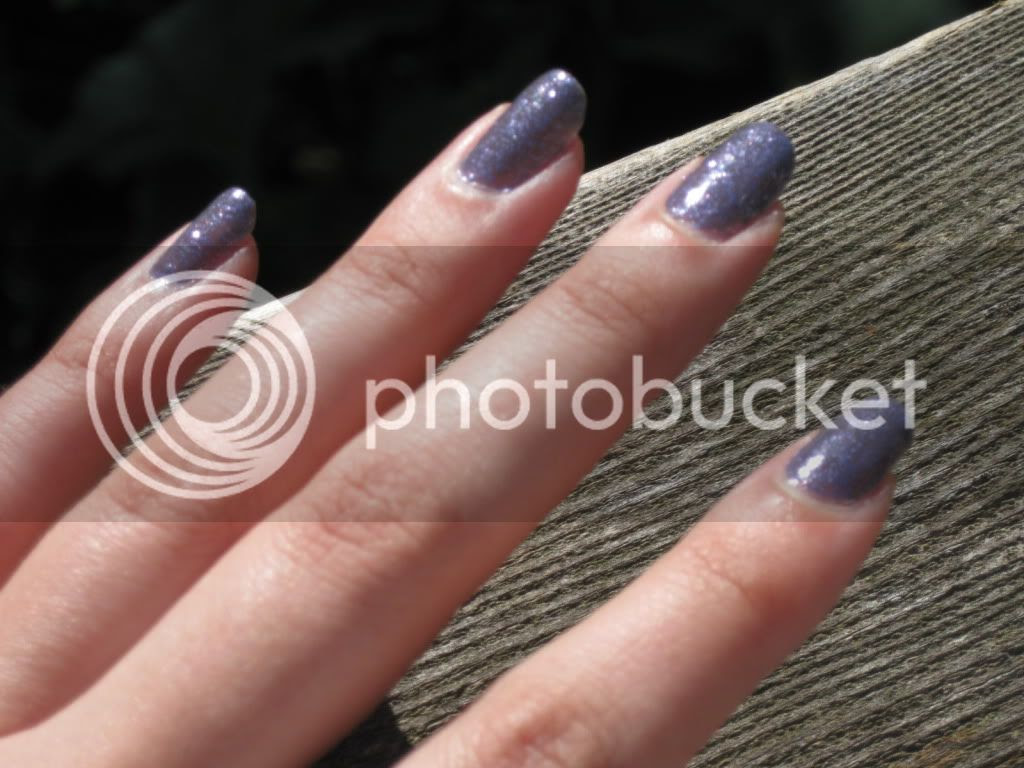 They're advertising this as part of their autumn/winter collection, but I picked it up quite a while back in a little kit with some polish remover. I tested it out over whatever I was wearing at the time (in the car, yes), thought it was going to be too sheer for anything but a layering polish, and forgot about it until now. SURPRISE SURPRISE, three coats looks reasonably opaque.

I enjoy this one quite a bit but take exception to Butter London's use of the word "greige" in its description. "Greige" is not a word. It is not. While I'm whining, neither is "jegging." I can barely type that one, it provokes such a visceral response (THAT MEANS IT MAKES ME VOMIT). Let's slam all the words together OKAY NO

I had a worse time removing it than I usually do with glitter polish, but it succumbed in due course. 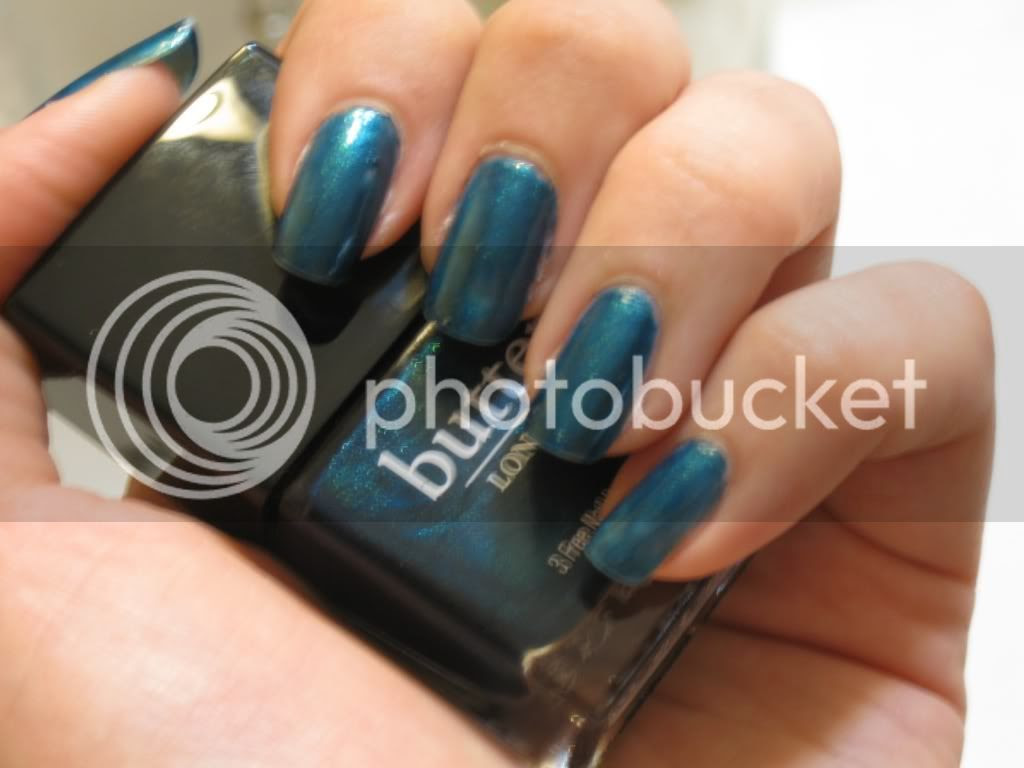 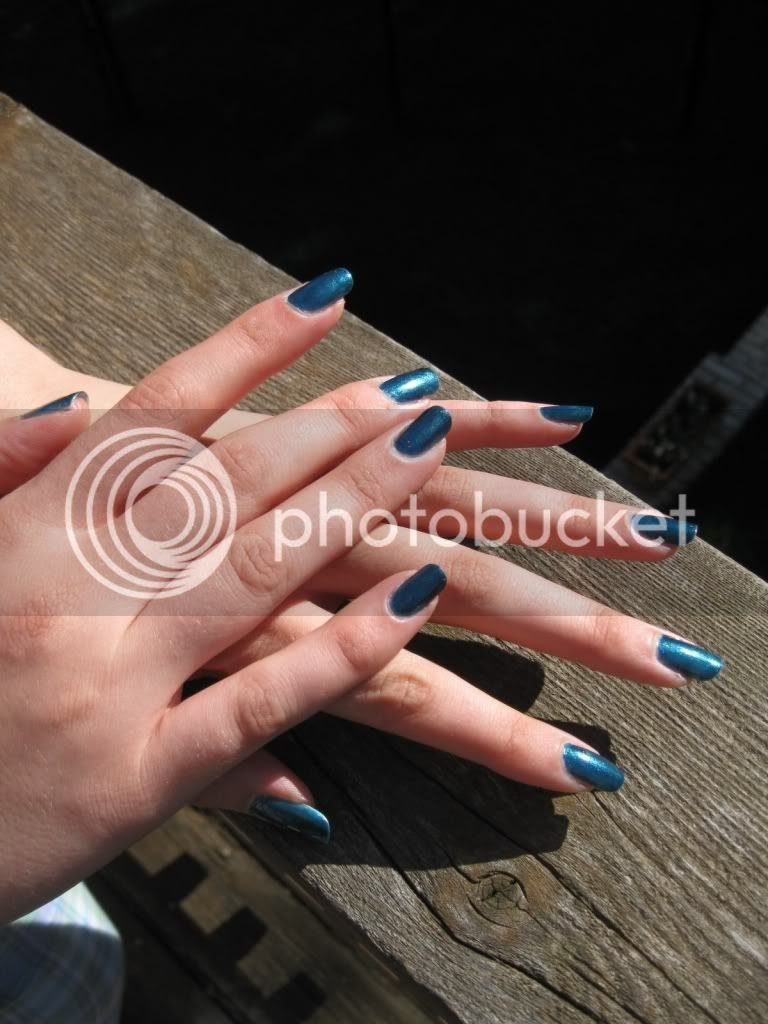 Here's my mermaid color. It's not as mermaid as Zoya Charla, but what is? It hints at a VNL problem with three coats, but not bad enough that you'd notice if you aren't staring for it. It gets a B-. I will keep it because I'm a tealhead, but it's not superfantabulous with my skins, and I don't want to eat it. 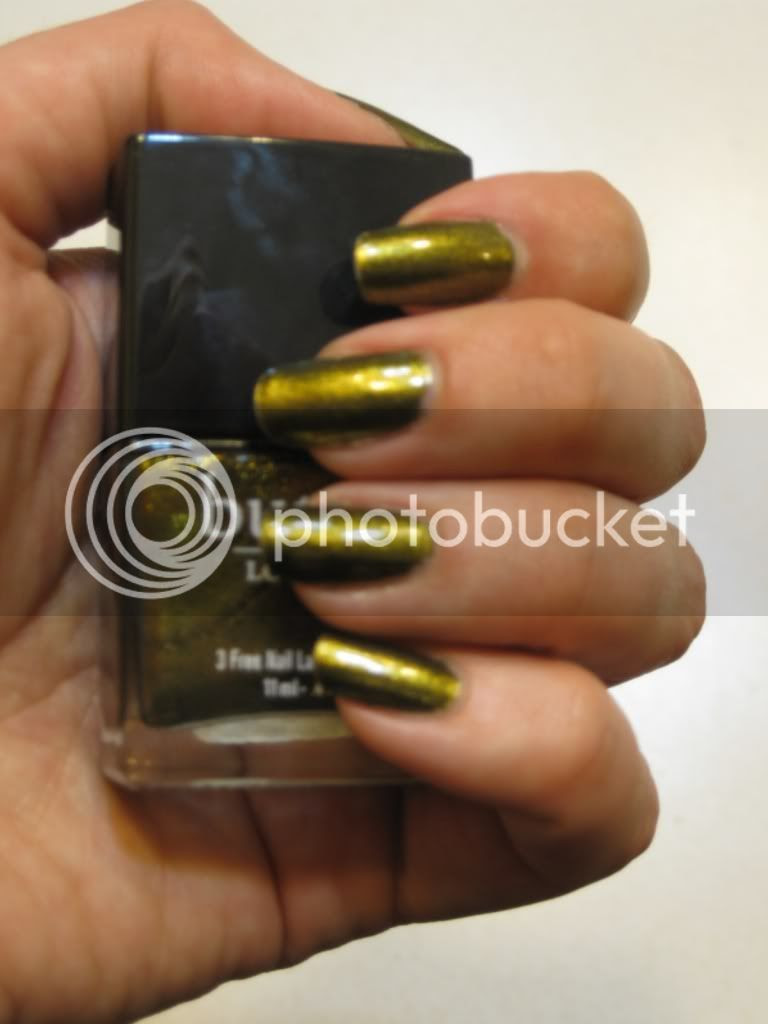 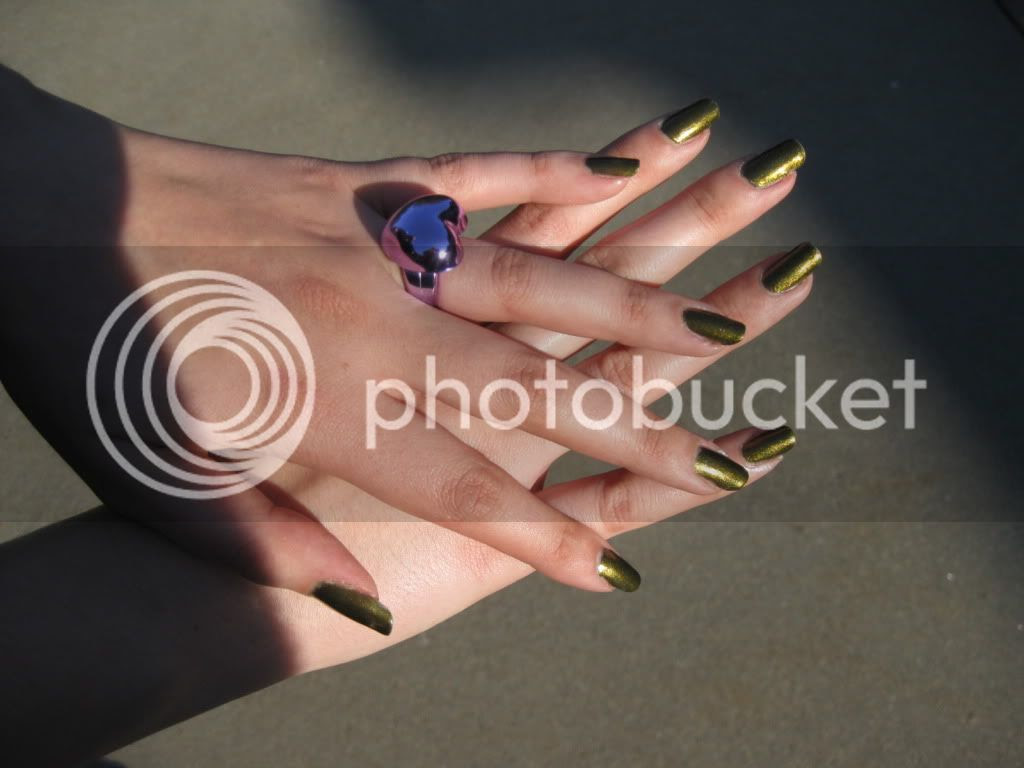 I was anticipating this one with much glee, and it did not disappoint. I am not thrilled about the descent of olive mud green puke colors this fall, but Wallis has enough gold in it to whisper my name in its thin little voice and to keep it from clashing horribly with all my clothes. I predict heavy rotation.

Note the highly attractive ring I got with a bottle of Hard Candy polish. 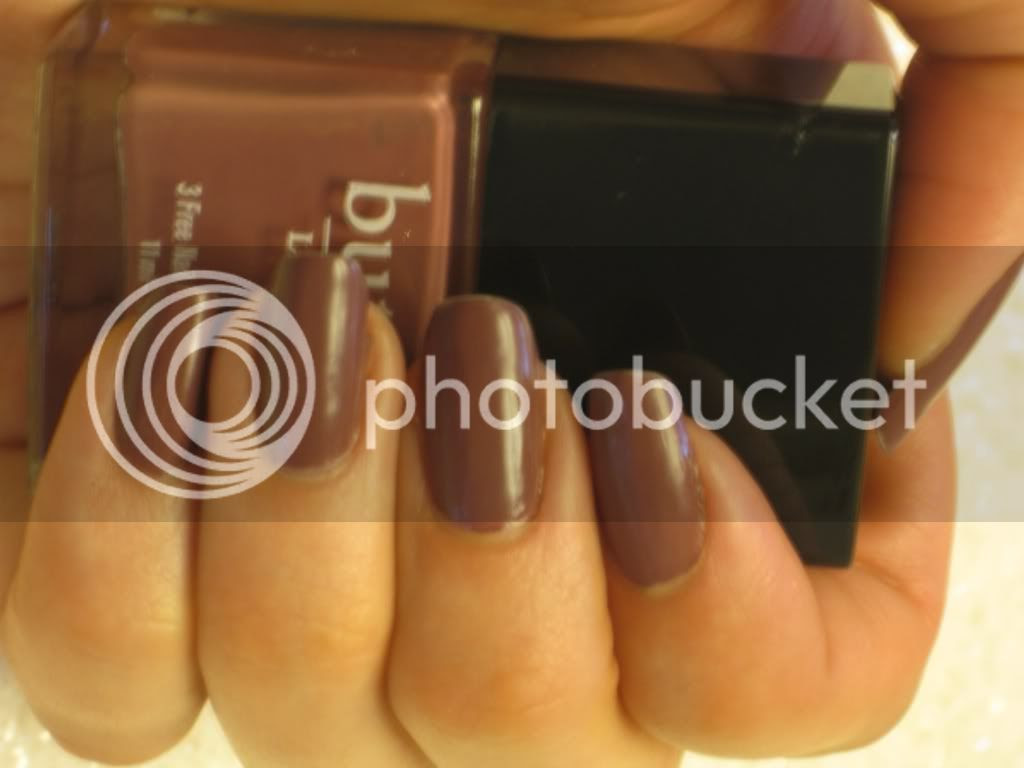 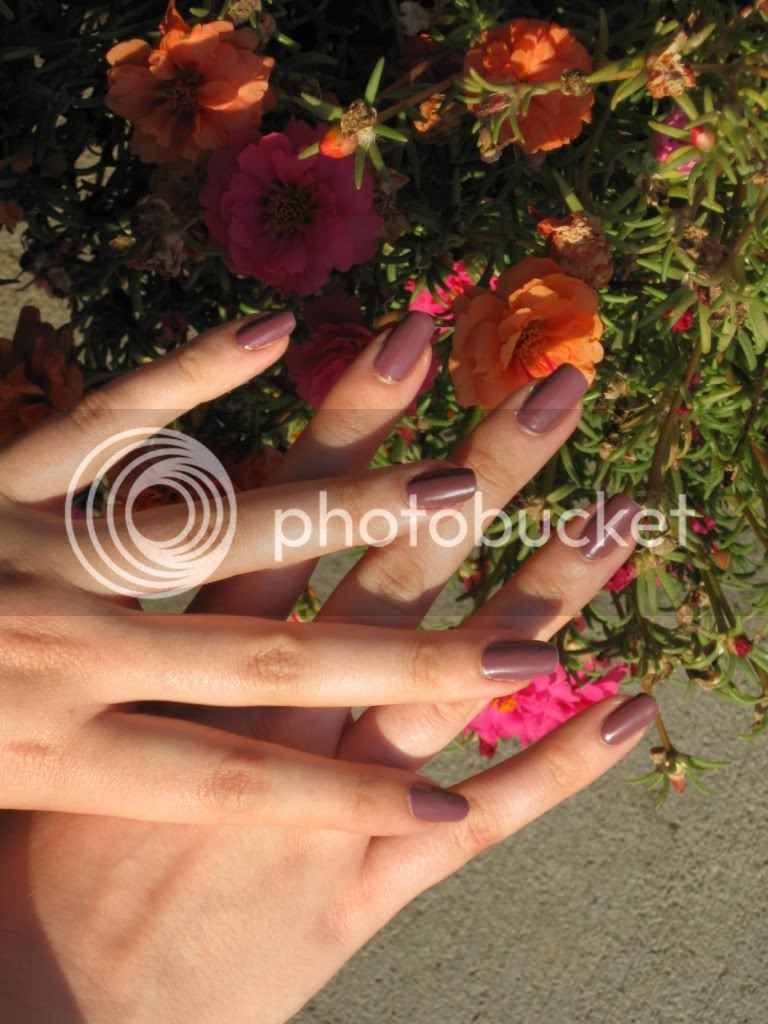 Going by the bottle, I thought this would be pinker than the mauve-type it turned out to be...I think there is more purple in it than I can coax out with my camera. BUT I LIKE IT A LOT. It's classy enough for the odd day I need to look semi-professional (those days generally turn out pretty odd) but not too dull for my somewhat eclectic tastes.

COMING UP NEXT WEEK: some fall stuff, I don't even know, I bought like all of it. Thank god none of the holiday previews interest me in the slightest. Really, Zoya? Essie? Really?
Posted by Starfighter Tigerlily at 8:08 PM No comments:

As it is now September, I deem the season to be autumn for all practical purposes and can rotate the polish accordingly.

I bought just three of the twelve Zoya Smoke and Mirrors collection. Some of the others appealed to me, but the swatches I'd seen didn't look that great. If I find any on clearance later, I may pick up a couple more, in particular Yara and Cynthia. 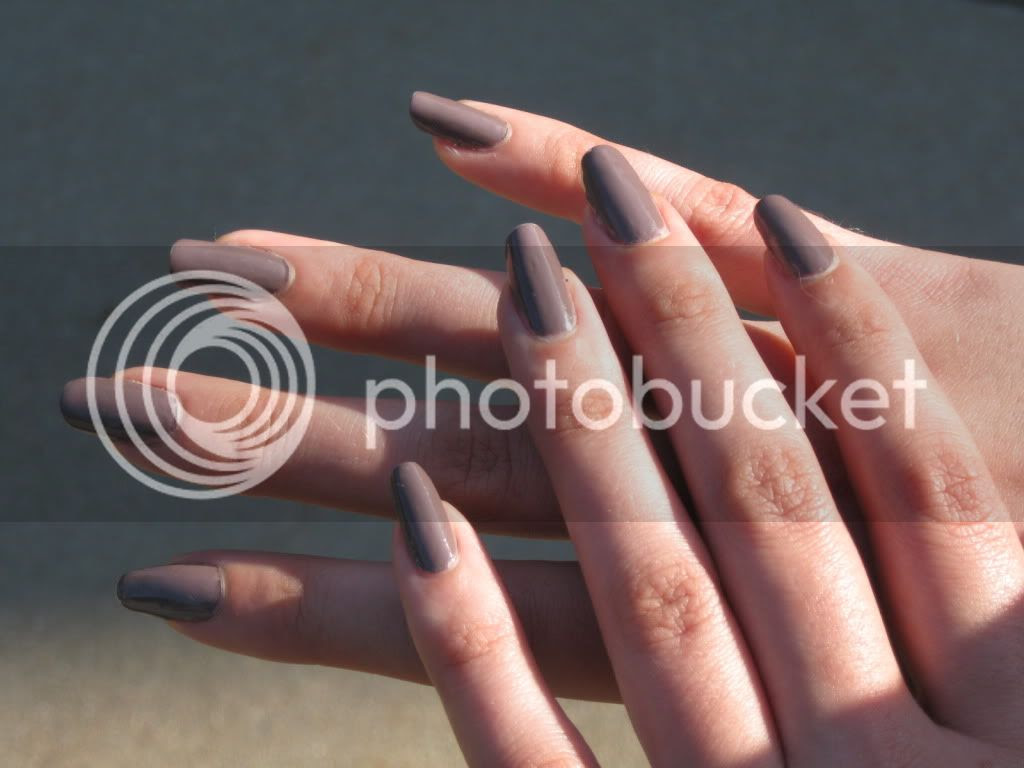 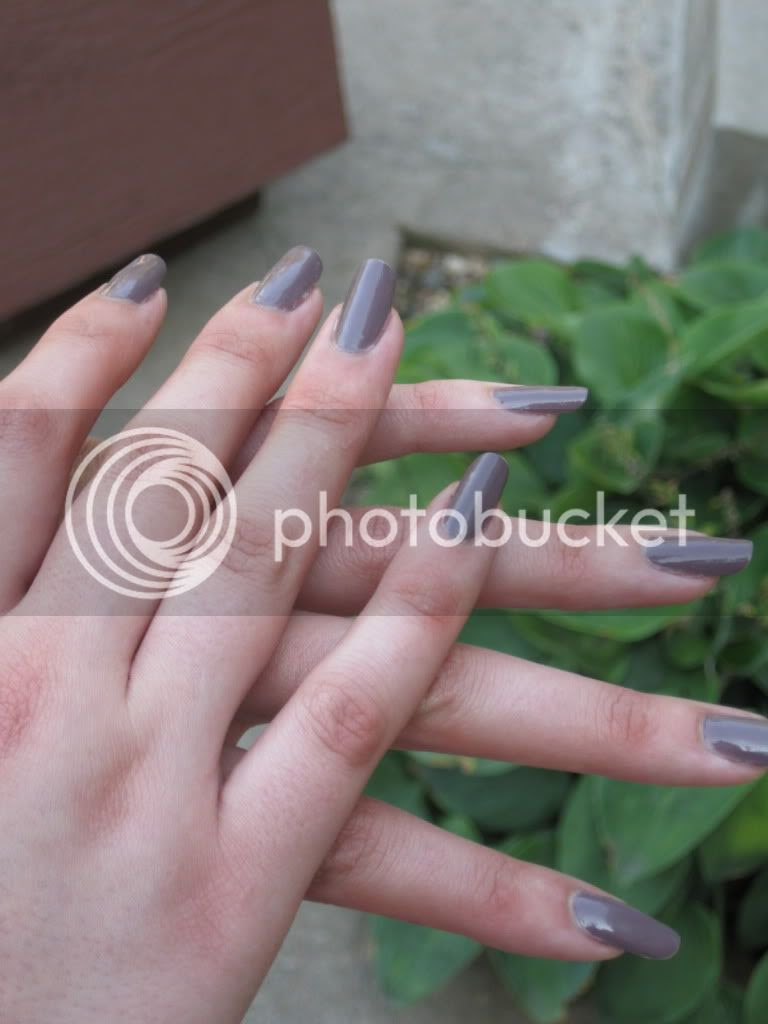 I am somewhat fond of this one. Personally I would call it a purple-based taupe. It went on quite smoothly and didn't make me want to punch babies. The wear wasn't very good, but this is a recurring problem I have with Zoya. Their color selection is above par, however, so I continue to purchase. 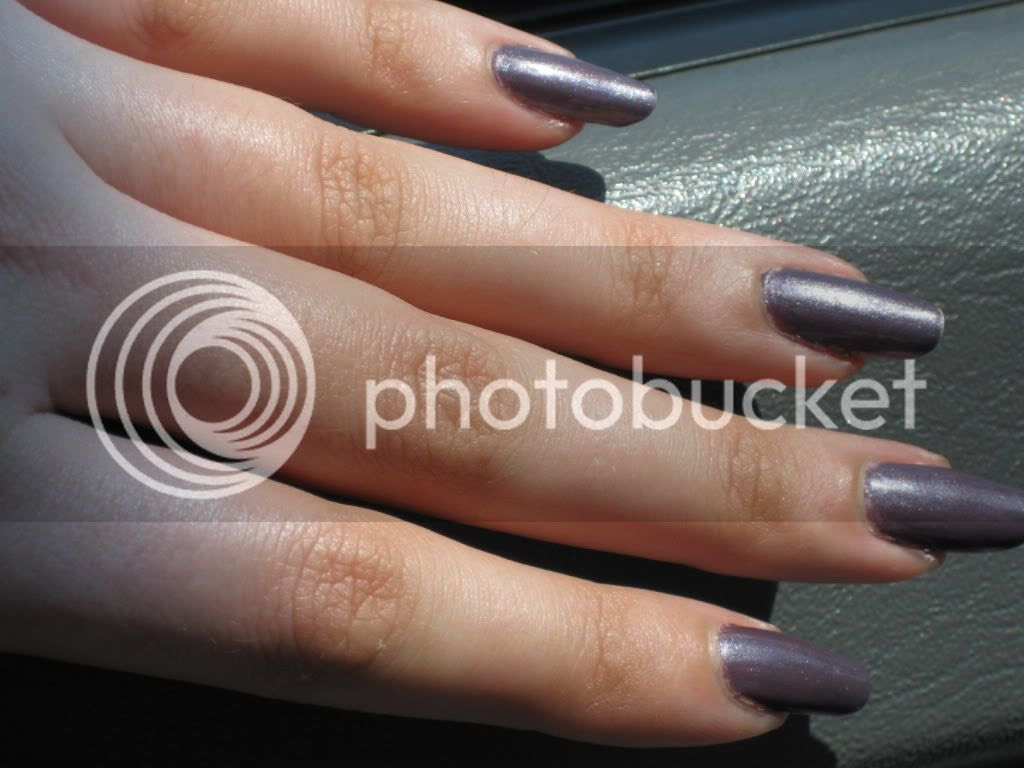 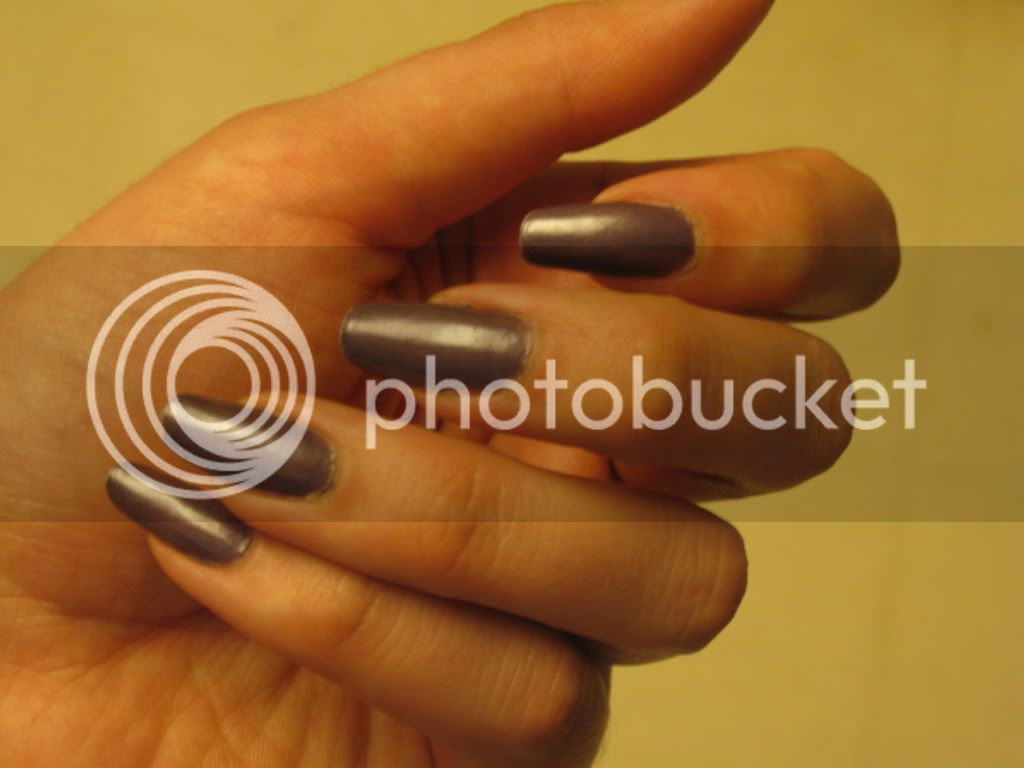 This was super shiny. The "sun" picture was taken in my car as I was fairly certain the light would be past prime before I left work (as indeed it was). The other one, I don' t know, at least two of the three light bulbs in my bathroom are supposed to be "daytime natural" or whatever, but it doesn't look like it. 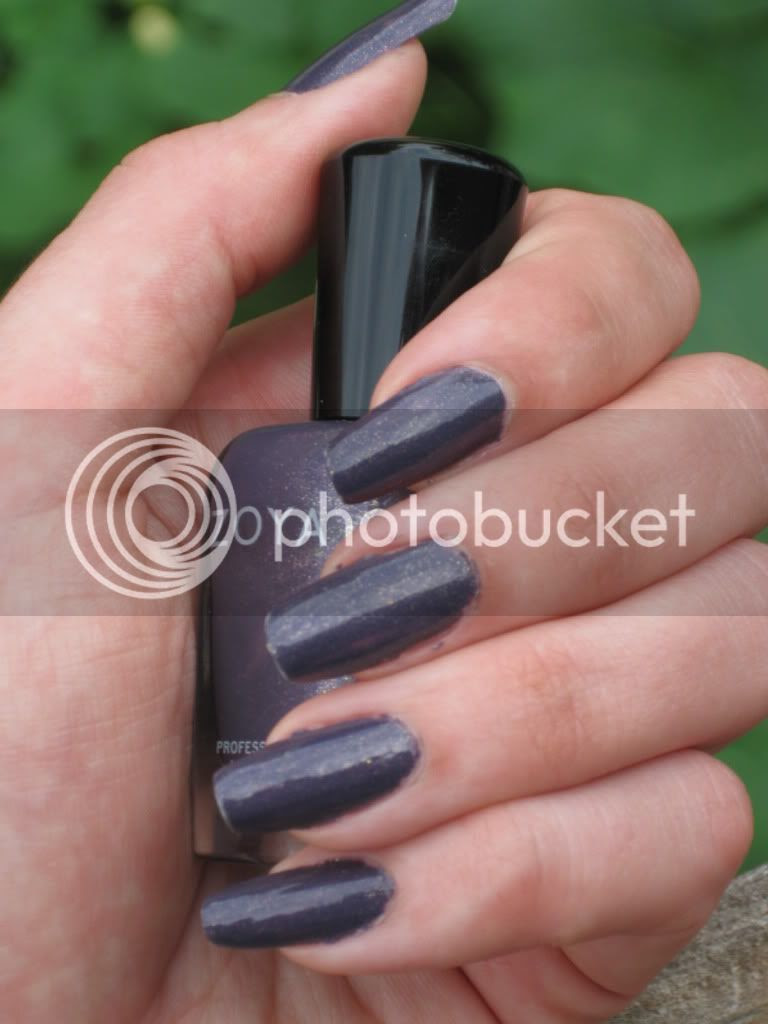 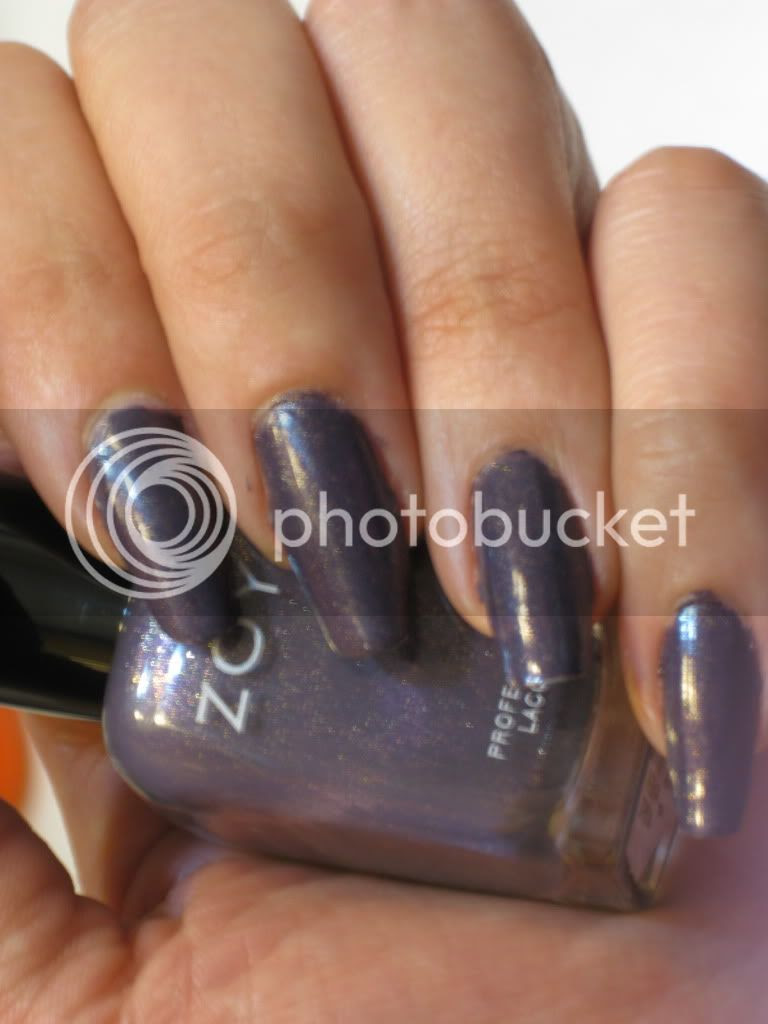 Actually, I was disappointed in this one (should have gotten Cynthia instead). The bottle looks like the polish is way more glittery than it is once on the nail. The only photo I got that came close to capturing that was like. D-T level blurry. So you'll have to take my word for it.

I trimmed my nails way down after this round, because they looked borderline creepy. I cut them shorter than intended, as will be demonstrated next week (BUTTER LONDON SO EXCITED), but they will regenerate. I hope.

Posted by Starfighter Tigerlily at 5:10 PM No comments: